Temporary Note: For reasons that I’m sure make sense to itself the company which has supplied my phone and Internet connection for the last decade recently decided to celebrate the upgrading of the local telecommunication network by closing my account with them and deleting my phone number. Currently I’m in the process of rectifying this but it’s taking longer than expected due to some uncertainty as to whether I and my home address actually exists. I’m pretty sure I exist and so does the apartment I’ve lived in for the last ten years but apparently my word doesn’t count for much within the telecommunications industry. Anyway, until such time as I have a home connection once more I’ve been reduced to using wi-fi wherever I can find it, a situation not really conducive to regularly posting at Doctor Strangemind. Normal service will be resumed just as soon as it’s agreed that I’m real and so indeed is my apartment (and if not, then why the heck did I have to pay all those phone bills?)

The green shoots of talent are hard to predict.

Like most of the mouldy hepcat set I see myself as being part of my absolute favourite John Belushi film is The Blues Brothers. I doubt many of you would find this fact, or the fact that my second favourite Belushi film is Animal House, particularly surprising. Just as few of you are likely to be shocked when I tell you my favourite line from Animal House has Belushi delving into alternate history:

Bluto: What? Over? Did you say “over”? Nothing is over until we decide it is! Was it over when the Germans bombed Pearl Harbor? Hell no!

My second favourite line from Animal House is, I believe, a more controversial choice. It’s uttered just after the boys return from the road trip and Flounder discovers the terrible things that has been done to his brother’s car. It’s at that point that Otter channels his inner politician and utters the most utterly perfect statesman-like line ever uttered:

Otter: Flounder, you can’t spend your whole life worrying about your mistakes! You screwed up… you trusted us! Hey, make the best of it! Maybe we can help.

Oh, and look, a science fiction reference at last. Flounder was of course played by Stephen Furst, who went on to play Vir Cotto in Babylon 5. And would you believe it, my two all time favourite scenes from Babylon 5 feature Stephen Furst as Vir (one involves Vir & Lennier stress relieving in the bar together, the other involves Vir telling Mr Morden that what he, Vir, wants is to live just long enough to see them cut Morden’s head off and put it on a pike so he can wave to it).

The speech I really want to quote however occurs early in the movie when the Deltas are deciding on which pledges to accept and Flounder’s picture appears on the screen. Most of the Deltas respond in a less than impressed manner but then Otter gets up and gives a speech about why he should be admitted:

Otter: Okay, okay, this guy is a real zero, that’s true. Just think back when you guys were freshmen, huh? Boon, you had a face like a pepperoni pizza, right? And Stork here, everybody thought the Stork was brain damaged. I myself was so obnoxious, the seniors use to beat me up once a week. So this guy is a total loser? Well let me tell you the story of another loser.

I love that speech because it reminds us all that no matter how successful or weird or clever or pompous we are we didn’t start that way, we had to work at it. Nobody starts as the mightiest tree in the forest, we might begin as a Flounder but only time will tell if we end up putting the burn on our very own Morden.

But you don’t have to believe Otter or myself. Let me quote from a speech made at the 1983 Disclave by one of the authors attending that con (for the record the text of this speech was reprinted in Bill Bower’s fanzine, Outworlds #34). Our mystery author begins thus:

Maybe a few of you were here in ’71 too. If so, maybe you remember me. I looked a little different back then. My hair was shoulder length, just like everyone else’s, but I was still clean-shaven, I didn’t stop shaving until 1974. Even then, I was a snappy dresser. In fact, I was a hell of a lot snappier. As I recall, I wore my Psychedelic Hippie Pimp outfit to the con: ankle boots with zippers, burgundy bell-bottoms, a bright solid green tapered body shirt, a black satin scarf, and — the piece de resistance — my famous double-breasted pin-striped mustard-yellow sports jacket. Perhaps now you veterans recall me. I was the one wandering around the con suite doing permanent retinal damage.

Gah! I can’t imagine an outfit like that would be easy to forget. However, this doesn’t seem like a random wardrobe choice, oh mystery author:

You might wonder why I dressed up like I did. After all, it was only a con.

Yes, the thought did pass my mind:

…I figured I had to dress well because I was gonna be such a center of attention at Disclave, You see, I wasn’t no mere neofan wandering into his first con. Hell no! Not me! I was a filthy pro! Well, maybe not filthy, but dirty anyhow. Smudged a bit around the edges. I’d sold two stories. My first story had been published in Galaxy just that February. (Anyone here remember Galaxy?) My second I’d just sold the month before to Ted White for Amazing. It hadn’t even been published yet. In fact, I hadn’t even been paid for it. But I knew Ted was going to be at the con, and I was looking forward to meeting him. He was the editor of a major prozine, after all, and I was a brilliant new writer he’d just discovered, so I figured he’d certainly want to take me out to an expense-account dinner at Sans Souci, and I didn’t want to be under dressed. Besides, I figured I had to impress all the fans who’d be coming up to me for autographs. After all, I’d published a story! Hell, I’d made a career total of $94 from SF writing at that point, and I was gonna burst through into triple figures once Ted paid me. 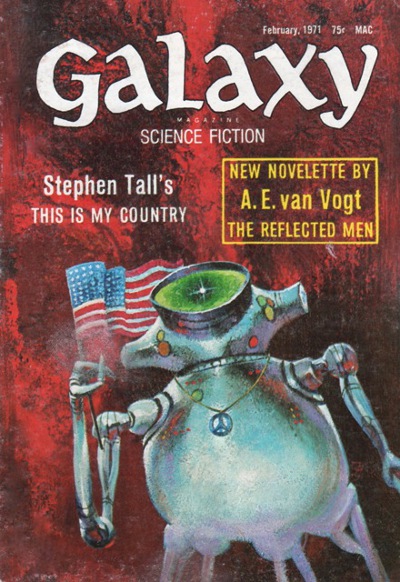 Expectations, you can have all that you want because they don’t cost a cent (at first anyway). I guess making that first sale ensures every budding author feel like singing that line from I’m On My Way (as sung by The Proclaimers), “I’m on my way from misery to happiness today!”

Well, things didn’t quite work out the way I’d planned at that first Disclave. I must say, though, they started off promisingly enough. Once I found the con, that is. This was 1971, you must recall, and Washington didn’t have subways then, just holes-in-the-ground that screwed up traffic, plus a lot of buses. The con was at a different hotel, the Shoreham I believe, and I’d never been there, so I got on a bus Line I’d never ridden before and asked the driver to let me know when we came to the Shoreham Hotel, and settled down to read or look out the window or do something or other. Next thing I knew we were at the end of the line and everyone else had gotten off the bus. I had to ride all the way back, but finally I did find the hotel, and after that I managed to find the consuite. Just inside the door there was a table set up where they were taking registration. Sitting behind it was the very first science fiction fan I ever met. He was a very skinny guy with hair down to his waist and an extremely scraggly beard and a manic gleam in his eyes. He looked sort of like an orange Rasputin. He was not as well dressed as I was. But I forgave him that, because when I paid my money to register, he recognized my name! “Where have I heard that name before?” he asked me.

Oh yeah baby. The thrill the first time you arrive at a con and discover somebody you haven’t already met knows who you are. Notoriety is addictive! The world recognises that I exist! I have been validated!

I modestly allowed that I’d had a story in the February Galaxy and perhaps he had seen my by-line.

‘Shit!” he yelled. “I bought that story!” Then this skinny, hairy, orange guy introduced himself. His name was Gardner Dozois, he claimed, and he was an editor at Galaxy.

And now the plot thickens. At least for any of you familiar with the the name Gardner Dozois. I assume one or two of you who read this are (he assumes facetiously).

Then he buttonholed another skinny, hairy guy who’d come over to check on registration or something. “Jay,” he said. “here’s a guy I fished out of the slushpile.” Jay, as I recall, hadn’t read the story. In fact, although Gardner was to, introduce me to several other people at the con as a guy he’d fished out of the slushpile, none of then had read the story either. gr head of-it. Gardner was the only person at Disclave, or in the entire district of Columbia, it seemed, who was cognizant of the fact that I’d published a story.

I could suggest here that pride goeth before a fall but that would hardly be fair. Our mystery author later mentioned in his speech how in 1971 he was shy and something of a wallflower so I’m willing to bet he wasn’t as keen for mass adulation at the time as some of the material above suggests. He was surely sensible enough to realise he had done very well to encounter not one, but both editors who had bought a story of his (yes, he eventually met Ted White though he didn’t have much to say about that event).

I think that on the whole George R.R. Martin was pretty satisfied with his first public outing.

Yes, the man behind Game of Thrones was once a shy newbie wearing a mustard-yellow jacket and burgundy bell-bottoms. Would you have spotted him as a talent to watch? I doubt very much that I would have. So you see what I mean about nobody starting as the mightiest tree in the forest. George R.R. Martin may have begun his as career as the literary equivalent of Flounder but since then putting the equivalent of a burn on Morden is the least of his achievements. And that’s the thing, you might see somebody wearing an unlikely outfit talking excitably about the story they just had published and you may be tempted to roll your eyes. However, stay your contempt for at least a bit, unprepossessing as that individual may seem at first glance can you be really sure that they won’t become the next George R.R. Martin? And wouldn’t you like to be able to say, “I remember when…”

P.S. I have a theory by the way that Dave Jennings, the professor in Animal House, is actually Oddball, the tank commander from Kelly’s Heroes, fifteen years older (it helps that Donald Sutherland played both characters). I like to think it adds depth to both films, illustrating how the rebels of one generation can end up out of their depth when dealing with the next generation.