Hugo Gernsback was a veritable fountain of bad ideas. And yet…

So here we are folks, proof positive that there is hope yet for even the stupidest of inventions. When I first saw this particular Gernsbackian brainchild years ago I mentally labelled it as one of the least practical inventions I’d seen from a man who seemed to specialise in unworkable ideas.

However, given the current state of affairs I’m beginning to warm to the idea of fitting out those office workers who can’t perform their duties from home with Isolators. Given each one of them an Isolator and enough bottles of Gernsback’s special oxygen mix and away they go! 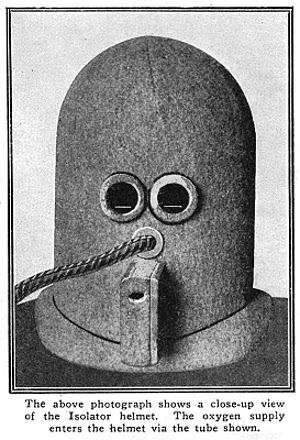 Admittedly these suits might not prove popular with the average office worker but that merely demonstrates how little imagination most people possess. The observant among us will quickly realise that once in the Isolator it will be very difficult for the outside world to tell just what an individual is up to. With a little effort there should be enough space in the Isolator to make smoking or drinking possible if the imbiber is willing to make a few adjustments (a bottle with a straw for example). Alternatively, it will be obvious to the canny office worker that once the Isolator is donned it’s very difficult to tell who’s in it. Thus if an individual wanted the day off all they need do is pay a student in need of a little extra cash to go into the office wearing their Isolator and who would notice the impostor?

Yes my friends, the Isolator is the way of the future. If we can’t have jetpacks then why not something equally stupid bit of weird technology? Be the first on your block to build and market your own version. I dare you.