The reality of unnatural phenomena.

Forlorn we wait the lashing of the waves,
As they hunt with empty formless hate,
Striking our wooden walls until the boat it staves,
And draws us down to our dreadful roiling fate. 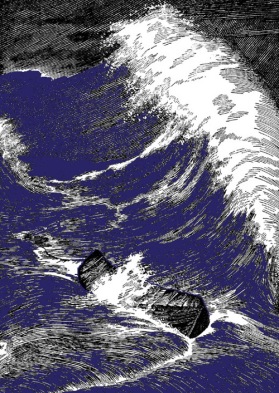 The principle of mass conservation is one of the fundamental laws used in physics to explain the way the universe works. It states that the mass of a system must remain constant over time, thus mass can neither be created nor destroyed, although it may be rearranged in space or changed in form. The law implies that during any chemical reaction, nuclear reaction, or radioactive decay in an isolated system, the total mass of the reactants or starting materials must be equal to the mass of the products.

It’s a law that I have decided can be equally applied to fiction.

Consider this plot then. Boy meets girl. They fall in love. Drama occurs. That’s reality and it’s all around us so the creation of fictional drama is really a process not unlike photosynthesis. In other words the creativity is in rearranging in space or changing in form that which already exists.

Okay, so lets consider another example. Boy meets girl. They fall in love. Girl is werewolf. Drama occurs. So does this violate the principle of mass conservation? Werewolves don’t actually exist so does this count as actual creation, an addition to reality rather than photosynthesis? At first glance something like this does seem to be violating the principle due to it’s fantastical nature. But no, like all fantasy the idea of a werewolf is simply a misinterpretation of reality. Werewolves do not exist in real life but every part of their legend is based on some aspect of reality not properly understood by the creators of said legend.

What makes the idea that the principle of reality conservation in fiction so interesting is the game it allows in regards to myth and legend. If such stories are based upon the misinterpretation of reality then the fun is in narrowing down the possible sources of said misinterpretation and disproving the red herrings. One of the best (and most readable) examples of this process is a book called The Legend of Sawney Bean by old-time British Science Fiction Association member Ronald Holmes. In the book Holmes dissects the legend of Sawney Bean, a cannibal who along with his family supposedly lived in a cave and preyed upon travelers in the Galloway region of Scotland. Usually there is not nearly as much useful detail as Ron Holmes had to work with so legend doesn’t always lend itself to easy interpretation. Sometimes though you can be sitting there quietly, just minding your own business, when a fact comes along to pierce the murky depths of legend. Take the story of the Flying Dutchman for example.

The first reference in print to the ship appeared in 1795, when George Barrington mentioned the matter in his book, Voyage to Botany Bay. According to Barrington sailors had told him of a story about a Dutch ship that was lost at sea during a horrendous storm. This it was claimed was due to Captain Bernard Fokke for he was known for the speed on his trips from Holland to Java. The story went that Fokke was aided by the Devil and that he and his crew eventually paid the price for dealing with Old Nick and so were consequently doomed to sail the seas forever more despite their demise. Sighting the Flying Dutchman was said to be very bad luck.

Now what strikes me most about all this is how late in the piece this legend comes. The general agreement seems to be that the Flying Dutchman legend originated in the eighteenth century and that my friends is passing strange. If the Flying Dutchman obeys the principle of reality conservation in fiction then what changed to make such a story suddenly possible? Clearly some new phenomena was needed because mysteriously abandoned boats drifting with the currents is a scene as old as sailing itself. If it was simply a matter of sailors wanting to explain boats apparently travelling by themselves then I can’t imagine they would wait till the eighteenth century to invent the Flying Dutchman story.

It’s for this reason I’m not convinced by the popularity of the fata morgana as an explanation. The fata morgana is a mirage that occurs when warm air rests right above the cold air near the surface of the ocean. The air between the two masses acts as a refracting lens, which will produce an upside-down, distorted image of an object. Even though a ship may be beyond the horizon observers may see an inverted, blurry image of a ghostly ship that will suddenly vanish as the relative position of the observers to the real ship changes.

However given that the Strait of Messina, the body of water between Sicily and mainland Italy, is a famous location for sailors to encounter the fata morgana it seems a tad unlikely this is the inspiration. If it was, then again, why wait till the eighteenth century to concoct a legend of explanation for something known about by the Greeks and Romans? No, what we need to satisfy the principle of reality conservation in fiction is the appearance of some new phenomena that sailors did not encounter, and thus were not moved to explain, until the eighteenth century.

It was while listening to the radio one day that such a possibility presented itself to me. The presenter was interviewing a couple of professional treasure hunters who had been working off the coast of New Zealand. The conversation turned to certain sailing ships laden with valuable cargo that had sunk in those waters and how hard it was to find the remains of these ships.

Now you would think this was simply a case of there being no reliable information as to where the ships in question had gone down. This is fact was rarely the case due to survivors and sometimes even sailors from other ships being able to identify when and where a particular vessel had foundered and under what conditions. And of course once you know details like that the area a treasure hunter needs to search is narrowed considerably. So no, a lack of reportage was not the main problem, instead the major difficulty in locating many of these older wrecks has to do with sheep.

I have to admit that it seems reasonable to assume that once a ship has taken on so much water that the tipping point is reached there isn’t any direction for it to travel but straight down. At best logic dictates a sinking ship might head towards the sea floor at a steep angle due to losing buoyancy unevenly. Even so it should come to rest in a location easy enough to find so long as the location of the tipping point in known. All that reasonable assuming however is based upon steel hulled ships which are too heavy to behave in any other way.

To be fair that’s usually the case with wooden ships too. The average wooden ship might be a whole lot lighter than anything made of steel but the timber it’s constructed of doesn’t have unlimited buoyancy so once the tipping point has been reached that ship is going down. At best the buoyancy of the wood might slow the rate of descent but even that’s a moot point if the ship is laden with cargo, the dead weight of which is going to minimise drift. That, however, is where the sheep come in you see.

The fact was that much of the cargo being exported from New Zealand was relatively buoyant. Bales of wool were not only light in relation to their mass but also contained considerable quantities of trapped air. So while it’s true that a wooden ship carrying a cargo of wool wasn’t unsinkable, such ships would go to the bottom eventually, it’s equally true that depending on how many bales the ship was carrying the descent might take days or even weeks to be completed. So in effect a wooden ship that had been driven onto a rocky outcrop and taken on so much water that its decks were awash and the crew forced to abandon might still be riding high enough for the brave or the foolhardy to stand on the submerged deck once the storm has passed.

What really captured my imagine however was one of the treasure hunters pointing out that even a submerged ship is subject to tides and currents. Which means that after a ship has reached the point of being all or mostly below the waves it’s still being carried along by whichever current has a hold of it. Not only that but according to this treasure hunter such wool laden wooden ships often sank slowly enough to allow currents at different depths to push the ship in different directions. Not surprisingly this process introduces so many variables into calculating the final resting place that a sufficiently small search area can’t be defined. In other words there are sunken wrecks off the coast of New Zealand which are simply unfindable because it’s impossible to know how far they traveled during the process of sinking.

Now, it’s not impossible that something like this happened before the eighteenth century or thereabouts but it does seem unlikely. Early ships mostly carried their cargo unenclosed so I assume they went straight down as they sank because any buoyant cargo could break free and drift away. Even after ships became large enough to store cargo beneath deck the storage space was probably too small for even the most buoyant cargo to overcome the dead weight of the ship itself.

At some point however shipbuilders crossed a line in their quest for cargo capacity that would match the ever increasing demands of international trade. Most sinking ships still went down in the traditional manner but at last a small percentage with the right sort of cargo began taking the scenic route to the sea floor.

Imagine that your ship has just survived a storm and as you sweep the deck what do you see coming towards you but the tip of a mast. Eventually an entirely submerged schooner hoves into view, trailing ropes and scraps of sail silently undulating like the primitive fins of some prehistoric sea-creature. Slowly, but with seeming purpose, it continues on to who knows where. You don’t know what ship this is or why it’s doing something that to the best of your knowledge is totally unnatural. It needs an explanation though because something, anything, is better than the unknown, especially when you sail so far from man and all his works.

How easy would it be to imagine the mystery ship still crewed. Could those wavering shapes be more than a trick of the light in unsettled water? Who could that be but a forlorn figure of a captain standing in silent command beneath the shimmering waves?

And thus, perhaps, the legend of the Flying Dutchman and his search for release from Earth bound limbo is born.

One thought on “Far Beneath, the Abysmal Sea”